The Moon: Women Watch Themselves Being Looked At is a free feminist ‘newspaper’ ironically named in response to the best-selling tabloid in the UK, whilst also referencing the feminist fascination with the moon as symbolic of feminine energy. The Moon features essays debating the significance of feminism in the contemporary context, the research that led to the realisation of the Once More With Feeling event including a selective timeline of the history of feminist performance art as well as texts by the commissioned artists describing the live acts performed at the Tate.

The paper is also a performance tool – women can open its tabloid-size pages on buses and tubes or any public place where they see a man reading The Sun with page 3 visible. Page 3 has a large and playfully knowing picture of a nude man. In this way, the reading of this paper throughout the UK acts as an unplanned, spontaneous performance where women armed with their copies of The Moon silently battle with The Sun. On the back cover there are reproductions of a series of paintings made by Katie Horwich wherein she painted her daily outfits on top of The Sun‘s page 3 girls. There is also an illustrated timeline of feminist performance art history that runs along the bottom edge of each spread.

Published by CT Editions with the support of The Arts Council England and London Centre for Arts and Cultural Exchange. 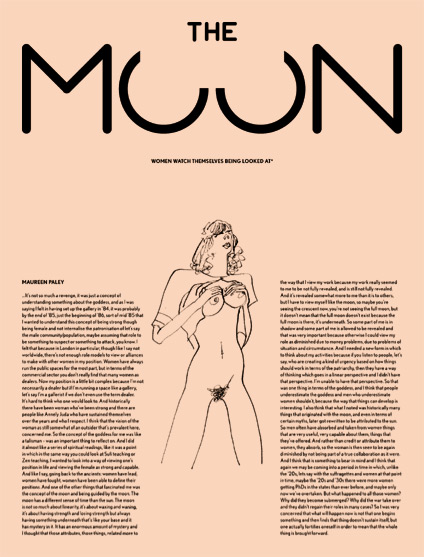