I was invited by Magdalena Suryani to perform at China Gorilla’s Intergalactic club night held at the Bloomsbury Ballroom which featured live art around a futuristic theme. My original plan was to do something involving dance, but because of an unfortunate incident with a heavy formica table top I was on crutches. I decided I’d make my life easier by using what I have to create a piece that could be done from a seated position. However, I still wanted it to relate to the theme in some way and the one thing I’m fairly certain about the future is that I’ll be older then. Thus my new alter-ego Granny Fanny was born. She’s been around the block but she still has a zest for life and decent hand-eye co-ordination.

Seated on a plush loveseat in a romantically-lit tent, I invited clubbers to tell me their fantasies and then birthed them onto the page in pen and ink or coloured pencil. Alternatively, I provided a photo opportunity for people who preferred to pose with Granny rather than confide in her. The fantasies that were disclosed to me by the clientele that evening struck me as pretty cliché, with a few exceptions. Many of the 20-something boys provided detailed descriptions of multiple, multi-ethnic women servicing them in impossible configurations, while women for the most part meekly offered a few key words like ‘on top’ or ‘very dirty’. I really enjoyed the one-to-one banter and I even scored a cheeky kiss on the lips from a cute boy as a gesture of thanks.

None of the described fantasies particularly stoked my fires, in fact by the end of the night I felt mildly disappointed that I hadn’t found a way to subvert the more stereotypical scenarios or to insert my own take on them. However, a couple of the fantasies did tug a tiny bit at my heart strings and had the added bonus of being challenging to depict (and I don’t just mean that it was tricky rendering twisted limbs poking into awkwardly placed orifices). One young man confessed to me that he’d never been on a date – he’d had girlfriends, but the idea of asking someone out intimidated him. He said he just couldn’t because ‘then she’d know I like her’ – as if asking someone out meant all your cards were on the table. So I drew a cartoon grid with the top left image showing him asking a girl out, the next box had them eating dinner, then watching a movie with the reward of the first kiss and feel leading to a simultaneous orgasm in the final frame. Another sitter, this time a female, said her dream was monogamy – so I drew her making love in the missionary position with the sun setting over the ocean in the background and a moon in the sky to symbolise eternity. The drawing is done in such a way that you see the genitals very clearly, I don’t know why Granny Fanny has to be so crass!? I guess that’s why I didn’t allow her to change her name when one guy suggested she call herself ‘Lady Labia’.

My feelings about this piece are still mixed; on the one hand I recognise that it takes some courage to embody a woman like Ms. Fanny, and on the other, the piece itself just seems too easy, like a one-liner, party shtick. In an attempt to redeem myself I shall quote Foucault’s The History of Sexuality 1: The Will to Knowledge, (be forewarned, he’s even more verbose than I am):

For many years we have been living in the realm of Prince Mangogul: under the spell of an immense curiosity about sex, bent on questioning it, with an insatiable desire to hear it speak and be spoken about, quick to invent all sorts of magical rings that might force it to abandon its discretion. As if it were essential for us to be able to draw from that little piece of ourselves not only pleasure but knowledge, and a whole subtle interchange from one to the other: a knowledge of pleasure, a pleasure that comes of knowing pleasure, a knowledge-pleasure; and as if that fantastic animal we accommodate had itself such finely tuned ears, such searching eyes, so gifted a tongue and mind, as to know much and be quite willing to tell it, provided we employed a little skill in urging it to speak. Between each of us and our sex, the West has placed a never-ending demand for truth; it is up to us to extract the truth of sex, since this truth is beyond its grasps; it is up to sex to tell us our truth, since sex is what holds it in darkness. But is sex hidden from us, concealed by a new sense of decency, kept under a bushel by the grim necessities of bourgeois society? On the contrary, it shines forth; it is incandescent.

I performed as Granny Fanny again at Departure Gallery’s Rhizomatic exhibition in Southall on 8 October 2010. 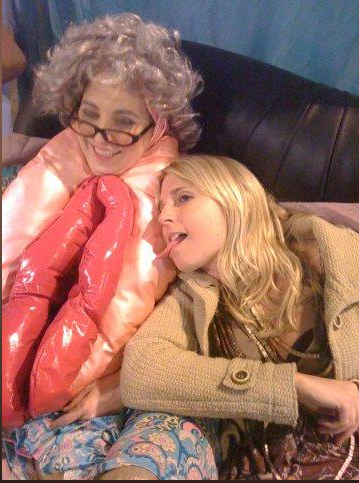 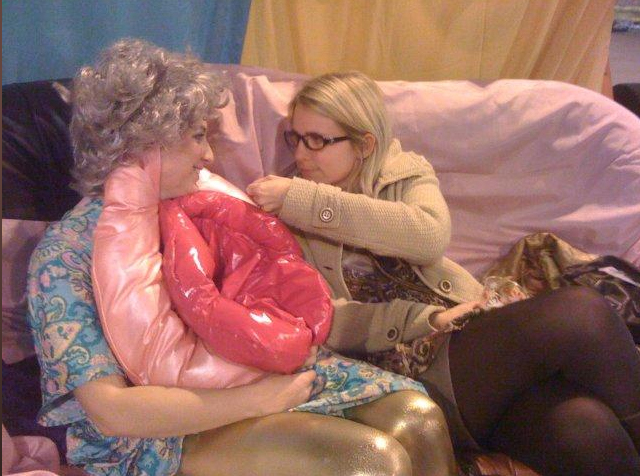