I signed up for a 2-day workshop on The Method offered by Sam Rumbelow at Whitechapel Gallery, the acting coach in Gillian Wearing’s film Self Made. I attended not having seen the film or really knowing anything about Method, just interested in how the self and autobiography can inform performance.

We began the class by briefly introducing ourselves to one another and by listening to Sam expound on the centrality of the unconscious mind in life and creativity. “The unconscious is the better actor”, he told us. The basic relaxation exercise we were about to perform would attempt to unlock our creative potential by loosening up our instruments – our bodies – and asking ourselves ‘where we’re at’. Our conscious mind might lie, but the body and the unconscious won’t. After we had taken turns saying our name, raison d’être and/or occupation, Sam commented on how terrifying that can be, just facing other people and making the simplest of introductions. The actor wants to get in touch with those scary feelings and harness them; using raw emotion and being able to repeat performances is their art. Our habits – often ingrained in the body, our finicky gestures, posture and the way we speak – are “self-taught ways of dealing with feeling”. I like the idea of being in more control of those things, especially as the host of The O Show where I need to be confident, poised and articulate even when unscripted, and my tendency is to be the antithesis, that is, quiet, unanimated, slouched, speaking through my nose and biting my fingers. Can method help me overcome this or will it only enable me to use it in a scene where that might be appropriate?

Sam went on with his litany of facts… There are three ways to know what you need and desire: Thought, Impulse and Emotion. 85-90% of what motivates us is unconscious. How others perceive us is apparently 55% based on what our body gives away, 38% our voice or tonality, leaving a meagre 7% for the actual words we might choose. (Quite a pertinent fact if you go down the route of becoming a body artist, or a poet for that matter.) His aim in telling us all this was to prove the point that while art can be conscious, more often it’s intuitive and organic. He also offered up these quotes:
“Humanity is the clay of your art” – Vakhtangov

“There are no distractions, only inspiration” – Strasberg

“Do the task with the energy that the task demands.” – Stanislavski

After talking about all the internal dynamics of being alive, Sam went on to discuss the external ones – creative choices – not just being alive, but choosing what to do with it. We all have needs and according to Maslow’s hierarchy, there’s an order to them: at the base are physical ones, then social ones like love, belonging and esteem – that apparently desist once sated – but beyond is self-actualisation, which once you get a taste for you always want more. Sam says creative work is often motivated by the desire to be loved, and many actors struggle to transcend the needs of the ego, but acting, for him, is really love of others. Ego-driven work is performing for others, a kind of showing off, whilst self-actualising creativity is sharing with the world. This seems particularly poignant to me, as someone who really struggles with my people-pleasing tendencies. How often do I work to please others rather than myself and how often do I confuse these things? But in order to transcend the baser needs and move on to self-actualisation, the first levels need to be sorted. I can take some comfort in that fact. No pressure to self-actualise until the other stuff is taken care of and taking care of that other stuff takes time and effort.

We’re all actors, says Sam, because we all take actions, but not everything is art – he is clear to point out. There’s a difference between art and craft and there’s a difference between producing and creating. Sam is a strong believer that art is driven by craft; you’re not an artist unless you have a process by which you can repeat certain results. But at the same time art goes beyond craft by manifesting not only what was not there before, but also what one didn’t even know could exist. This makes me think of the distinction Foucault makes between disciplinary procedures and practices of freedom, both may involve the same actions but only the latter leads to an unknown end point.

One word that Sam loves to say repeatedly, but Foucault would question, is ‘truth’. We need to find our truth, hidden in the recesses of our unconscious. Uh oh. Sam did point out that the truth was dangerous because we don’t know how to read it and when I questioned him about it, he said he didn’t mean to imply one ‘essential truth’, but I’m still wondering what he meant. In a piece of writing on his website he mentions that one thing he learned from analysis was that there is no one truth, so I’m giving him the benefit of the doubt that he means a contextualised and personal truth. My question is: Is the basic relaxation exercises tailored to release repressed emotion or compelling us to speak or in this case to howl and emote? Are we combatting an oppressive power or made subject of one in performing this basic relaxation? These uncertainties aside, I think Sam has a fair point that our society fears emotion and many people are out of touch with what they are feeling and also their creativity, not being well versed in the expression of either. Perhaps the basic relaxation exercise is most useful for those people, while I’ve already found a means of getting in touch with my feelings and being creative. Or maybe basic relaxation could become a useful tool in my artillery?

Actually doing the basic relaxation exercise was very challenging, I felt self-conscious with my eyes closed, stretching my limbs and moaning in front of a group of strangers (even though they were doing the same thing). I can see how for a performer it would be very useful to become comfortable doing this activity anywhere, anytime. But I wondered if the brevity of the workshop made this self-consciousness more difficult to overcome, perhaps after days of moaning alongside these same people I would be better at it just from sheer familiarity, in which case why didn’t we do more ice-breaking activities? I asked Sam about that and he said that if there was an end-goal to move toward an ice-breaker would be useful, but if we’re just trying to get into the ‘creative state’, the point is to feel those self-conscious feelings and push beyond our usual coping mechanisms while they are in full force.

So I’m left contemplating if I should start practicing basic relaxation 15 minutes per day as Sam recommends. Will it really fuel my creativity or improve my performances or I should stick with my own methods for overcoming self-consciousness, which though flawed, have worked to get me in front of the camera, albeit with what I feel are hit and miss results? 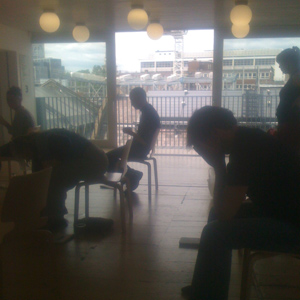