I participated in the DIY 7 Detour workshop run by artist Ania Bas, which was part of the Live Art Development Agency‘s programming. The description that enticed me to sign up went as follows:

Detour is a search for ways of extending the life of temporary/one-off/site-specific/context-specific/ephemeral live art works and exploring alternatives to touring. Participating artists will stretch possibilities of live art works through exploration of franchising, limited editions, uses of documentation, reaching new audiences, interweaving various art forms – and more! Detour is not simply looking for preservation of the work but for extending the life of the work beyond the ephemerality of performance itself and touches on problem of ‘sustainability’ of live art practice.

I specifically wanted to ‘detour’ Tableaux Vivants (2009) which I originally produced with an ensemble cast for Once More With Feeling at Tate Modern. The work is an abbreviated history that brings to life iconic images from feminist performance art including some re-stagings of painted masterpieces. Part of why I wanted to redo the piece was because I felt there was so much more that could have been added in terms of art historical and pop cultural references and I was curious to see what would happen with more rehearsal and development time. Additionally, I was concerned that the work lacked personal content and I was curious to find out how I could push that. However, to remake such a highly ambitious work was both financially prohibitive and logistically unfeasible without support from a commissioning venue.

Through discussion with the workshop participants and some personal deliberation I came up with a number of possibilities for ways to ‘detour’ this piece. One way is to re-create it within an educational setting working with students, and fortunately I have the opportunity to try something along those lines at The University of Hull in March 2011. The other possibility is to try re-performing the piece all on my own. Part of my hesitation about doing so is down to the fact that I am uncomfortable being nude in a live performance. At the same time, I want to push the piece to be more provocative and therefore possibly more explicit. To resolve this I plan to produce another version preformed by Mouse, whose cabaret acts subvert tropes of mainstream pornography and burlesque with a frenetic and childlike energy. This will hopefully be realised during one of the trashing performance events of the Performance Matters research project next year.

On the second and final day of the workshop I did my own impromptu version of Tableaux Vivants without many props and no costumes. Because I was still on crutches from having broken three toes in July (in a semi-art related fumble), one crutch was employed as a substitute sword in re-creating Artemisia Gentileschi’s canvas Judith Slaying Holofernes (1614-20). Earlier in the workshop one of the participants, Sally Lemsford had given each of us a present, mine came with an attached note that read “You are a performance artist, how can you use this object in a performance?” Everyone laughed when mid-performance I pulled this note out of my underwear as if it were my own Interior Scroll. Even though I wasn’t very convinced by what I had done overall, I was pleased with these particular, context-specific moments. Another perk was when Poppy Jackson told me afterward that she couldn’t imagine the piece being performed by anyone else. So maybe my presence as performer is what in fact gives the piece personal meaning, the very thing I was concerned was missing from it the first time around was the same thing that was literally absent. Ania agreed that my desire to dance the Rita Hayworth choreography was enough to justify the piece as a whole. My wish to take on different roles, to do what my art heroines and screen goddesses have done, that’s usually all I need to motivate me. I don’t know why this answer to the problems inherent in detouring Tableaux Vivants had eluded me until now.

I did a drawing depicting the first day of the workshop where we sat around talking in Live Art Development Agency’s Study Room. Each person is saying something that I found both memorable and indicative of their personality. The drawing depicts my perspective, with my legs out-stretched in front of me (because I had to keep my broken toes elevated). To the right is Ania the workshop leader who modestly admitted that she’s no expert and that we would be expected to provide guidance to one another. On my left is Dan Koop who said he liked the feel of a rarefied object when fingering through some quirky, live art documentation. Next to him was Poppy who didn’t say much (but was she did say impressed me), then Sally who kept letting everyone else go before her and so ended up being the last to speak. Directly across from me is Antje Hildebrandt who was saying how her intentions are tied up in the audience’s response, after which Tom Estes provocatively asked “Is that because you’re a woman?” That was the highlight of the day for me. Although a close second was when he started rambling on about a party he went to at a flat previously owned by Jimi Hendrix that was filled with what he described as ‘Lipstick Lesbians’, a story he felt the need to bring up after someone had used the word ‘lesbian’ in passing. I’ve come to learn that this was all part of a very subtle but completely hilarious performance piece he was creating for the participants of the workshop alone. Next to Antje was Michelle Louise Schiocchet who has lived in many countries and had a lot of very complicated ideas swimming around her head that all sounded very interesting but very abstract. She also had recently injured herself, as you can see she had a knee-brace on. Then between her and Tom was the lovely Dr. Lynn Lu, who also very much wants to please her audience. Seems to me she’s succeeding; she’s got a CV that would make most artists green with envy.

Tom copied my idea and made a drawing of his impression of the group. I think he found my depiction of him a little unflattering, so decided to get back at me here. I’m the blob with a broken foot saying “Vagina, vagina, vagina”. Pretty good likeness actually! 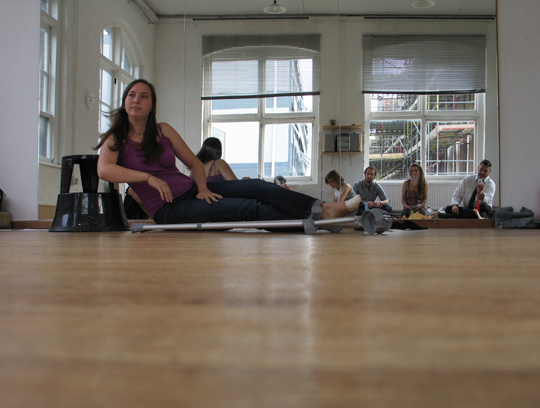