I’ve written a series of blog posts about the episode of The O Show that I produced for ‘P o P’ (Potentials of Performance), the closing event of the 3-year, AHRC-funded research project Performance Matters. My writing elaborates on the thinking behind the episode, which explores the relationship between the therapeutic process and performance.

Following Performing Idea (2009/2010) and Trashing Performance (2010/2011), Potentials of Performance (2011/12) focuses on performance’s emergent and unrealised potential: what does performance hold in store in its present-day testing of the limits of the social, the cultural, the vital and the critical? What lies latent within and around performance? What is waiting to be realised, developed, and made legible?

P o P consists of a series of commissioned Dialogue Projects by associate researchers –staged through innovative workshops, chat shows, round-tables, lectures, screenings, installations, performances, and a Materials Room. P o P will also include staged responses from respondents working across the creative and critical fields of performance, and an evening programme of events by special guests.

For information on the Potentials of Performance Dialogue Projects please
visit: http://www.thisisperformancematters.co.uk/activities.html 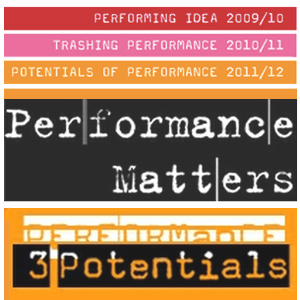