“A Very Brief and Biased History of Performance Art” is an exercise that allows students to come up with proposals for unorthodox re-workings of past performance pieces, without being hindered by having to actually make them. Firstly, I describe and show documentation from 5 performances, one for each decade from the 60s to today, for example:

Dividing the group into five teams, each are in charge of writing down the following details from the short lecture on the works:

They then have to come up with a written proposal to re-enact the assigned work by changing as many of these aspects of the piece as they wish. Because the task is to create only the proposal and not the actual performance this means that students can re-imagine the piece(s) in radical ways. 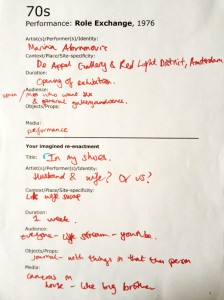 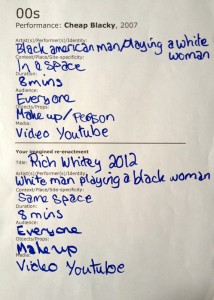