I was invited by Maria Walsh and Mo Throp to participate in The Subjectivity & Feminisms Research Group‘s dinner party at Chelsea College of Art & Design. They invited a group of around 20 artists and/or academics to read Julia Kristeva’s text The Impenetrable Power of the Phallic Matron (2008) and to respond with a 5-minute presentation or performance. We shared these pieces in an elegant dining room while being served gourmet goodies and fine wine by smartly-dressed young men.

Kristeva’s typically impenetrable writing was somewhat diluted in this text which took Sarah Palin as the easy target for it’s biting criticism. She starts the essay with the question: “The twenty-first century will be a century for women: for better or for worse?” So I began my performance by having someone ask me this same question as I stood sporting my red bikini, Ms. Alaska sash and Sarah Palin mask, cut just below the nose to reveal my own saccharine smile. I answered “yes” and provided reasons also borrowed from Kristeva’s writing, reading her words practically verbatim by stealing peeks at where I had scribbled quotations not-so-subtly on my forearm. I liked the idea of putting Kristeva’s words into Palin’s beauty-queen mouth and delivering them with a vacuous optimism totally uncharacteristic of the original essay. Not only did this demonstrate how the meaning of language becomes flexible through delivery, but it also pointed to familiar criticisms of Palin as a political puppet.

To move the performance along, the cue cards I had prepared read “Boo”, “Hiss” and “throw tomatoes” which the audience half-heartedly acted out. I ran for cover behind a painted copy of Velázquez’s Rokeby Venus (1647-51). Hidden there I quickly changed into a new costume tossing my bikini top, some matches and a lighter at the audience as a peace offering.  “You feminists can be so hard to please!” I shouted. “I was really hoping to make it to the talent competition because I wanted to show you how talented I am!” Once dressed in my hot pink pleather jacket and jeans, sporting an AK47 rifle I walked out with my back to the audience exclaiming: “I hunt!” “I’ve shot large animals like moose and bears and small animals like beaver. I bet you wanna see my beaver!?” Then I faced them VALIE EXPORT-style, pointing the gun with an order to look at my beaver – a small stuffed animal stitched between the opening of my crotch-less levis. Then I pulled out a piece of white fabric from just underneath the beaver’s buck teeth mimicking Carolee Schneemann’s seminal gesture. The fabric sash’s was printed with the words “Votes For Women”.

Musical accompaniment chimed in as a danced and sang “Sister Suffragette” from the musical Mary Poppins. At the end of the song I marched up to the canvas, took out my pocket knife and slashed it. Finally, I removed my Palin mask and stabbed it onto the canvas directly on top of the hazy mirror reflection of The Rokeby Venus’s visage.

This piece was developed and performed again at the ICA for Bob & Roberta Smith’s event Women Should Be In Charge. 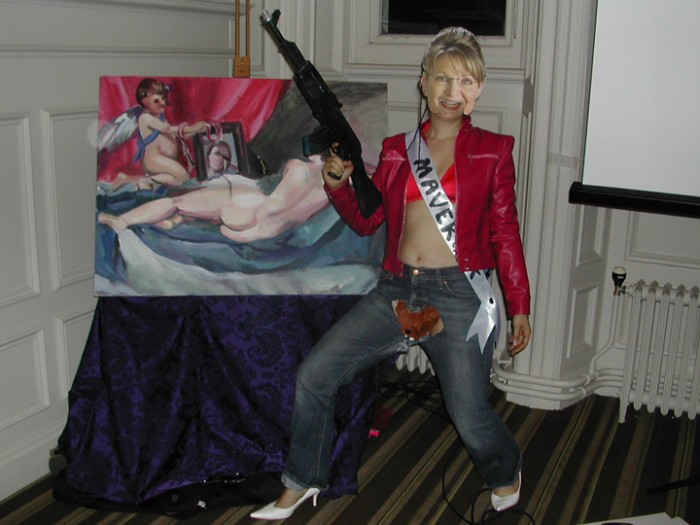