Rachel Mars and Mekella Broomberg invited me to participate in Bat Mitzvah’s Revisited, a spoken word event in celebration of International Women’s Day. I was one of ten “brilliant women” from different generations who were invited to deliver our bat-mitzvah speech how it actually was, as we wished it to have been or including advice we would like to give to our 12-year old self on our rite of passage into adulthood.

The other speakers’ material included a range of emotions, from winsome and funny to angry and irreverent. I was the last to give my ‘speech’ and was the only woman who had actually had a bat mitzvah, so the night ended with a celebratory bang. I did my makeup and got my hair done similarly to how it was on my bat mitzvah. Alongside a slideshow of pictures, I went over the details of the day with nostalgia and humour, finishing by doing 90s dance moves the Running Man and the Roger Rabbit, to “Everybody Dance Now”. I spoke about the fact that even though I was aware that my bat mitzvah marked my recognition as an adult in the Jewish community, I hadn’t realised, as wikipedia explained, that it meant I was from then on considered morally responsible for my actions. My bat mitzvah occurred about a year before the breakup of my dad and step-mom, which I think of as responsible for the turbulence of my adolescence, not me! So in my mind, it was my actions that came after that that I would prefer not to be considered responsible for and that I might prefer to change, not my bat mitzvah, which in so many ways was perfect.

As luck would have it, my bat mitzvah was on my actual 13th birthday, Saturday the 5th of January 1991. My cantor told me she wanted me to walk up to the bimah and feel ten-feet tall. Maybe I’m just very suggestible, but I think that’s how I actually felt. So many details I wouldn’t alter: the lectures I got when I didn’t study, the blessings my mother re-read from my naming ceremony, the penne alla vodka and tiramisu at the party, saying ‘no’ to the boy who asked me out afterward, my torah portion and the speech I wrote…

In the torah portion Moses stepped aside to see the bright sight of a bush that was burning and not being consumed. When I first read this I wondered if someone else had turned aside and done this, if she or he would have been chosen? Did the bush only burn for Moses to see? If so, why had god chosen Moses? Moses hesitated and asked himself the same question when he was asked to lead the jews out of Egypt to the promised land.

Moses had a stutter and was also insecure; he had many faults, he had killed another human being, he had not grown up among his people, he wasn’t dynamic and he didn’t seem to want the job. A leader should be charismatic, self-confident, forthright and noble as well as wise, but most of all a good decision-maker and a person who strives for what he or she believes in. To fight for what you believe is the key to being a powerful leader. Moses had a lot of these traits but did not produce/use them until he was asked to.

Maybe god saw the quality of leadership in Moses and put the burning bush there to help those qualities emerge? I believe my bat mitzvah helped me to begin to allow certain beliefs of mine to emerge. When you become a bat mitzvah it is important for certain qualities to emerge in order for this to be a successful and meaningful experience. When you begin practising for your bat mitzvah, pressure is put on you, you must make the decision of whether or not this is important enough for you to work and strive for. I asked myself what about this event is important to me? Thinking about this, I discovered that the legends and the stories of the Torah that have been passed down from generation to generation are still relevant today because of the morals they teach and the strength they provide. This helped me to know more about my self and my connection to other people, just like Moses who became more connected to his people and to his heritage when he accepted god’s command. 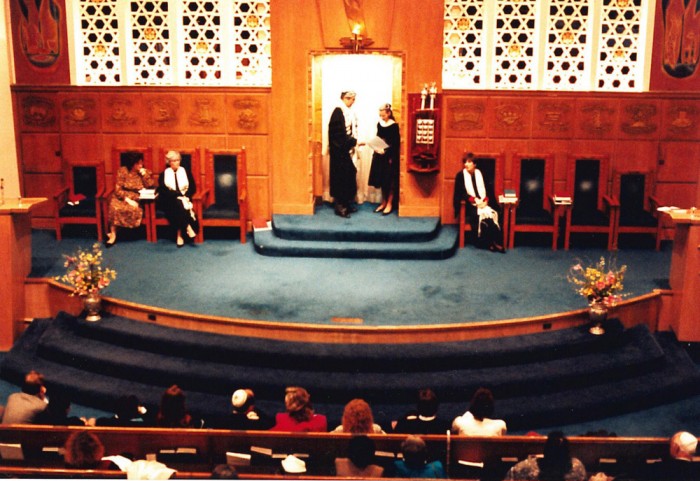