I spent the better part of a week at Tania Bruguera‘s workshop “Creating a New Profession: Behaviour Art” as part of the Hayward Gallery’s Wide Open School.  I’ve come up with a job called a ‘Subterfuge Stylist’ but I’m not entirely convinced about my own concoction.

Tania Bruguera’s workshop started off like a consciousness-raising session with each participant taking it in turns to bitch about one thing that irked them. I walked in a bit late and when Tania asked me what in society really got me really riled, I immediately felt an internal pressure to pick something political, perhaps because I know Tania’s work. I soon realised that I could have picked anything at all. The similarity to a C.R. session ended there; there would be no shoulders to cry on, which is not to say what happened next was without empathy. But what followed was the difficult task of trying to solve these problems, one job at a time.

On the spot we had to come up with three things an individual could do to solve the problem. This was really difficult and I could feel the apathy creeping in, that feeling of powerlessness. We pinned our list of actions to the wall and as a group we crossed them out if they’d been done and wrote down more ideas. Then we got to choose someone else’s issue to work with, which meant that some were flat out eliminated. In the cases where more than one person chose the same issue, those two people would have to compete to come up with the better remedy. In the afternoon we each worked independently to develop a ‘Dragon’s Den’-style presentation to pitch our idea for a new job (complete with catchy and explanatory title) that would tackle the chosen issue. We also had to prepare to ‘destroy’ one of the other person’s job proposals. So instead of relying on shared feeling, identification and collective finger pointing at society for our woes, we used our competitiveness and critical capacities to work in opposition yet together to (hopefully) arrive at active solutions. In short, the whole exercise struck me as an innovative way to turn the personal into the political.

The job titles we came up with were: Cultural Shaman, Subterfuge Stylist, State-Education Superhero, Global Passport Provider, Power Analyst and Title Teacher. One by one we presented these positions and then as a group debated or destroyed them. Tania astutely pointed out that we all think change is abstract and have therefore come up with public awareness campaigns rather than concrete jobs, as if real change is something that only someone else’s attitude adjustment can accrue, not our own simple actions. She said “I know the proletariat isn’t sexy” and then pointed out how almost all of us had come up with a managerial position which further reinforced how thoroughly indoctrinated we all are by the idea of vertical power structures. Perhaps ironically, all of the jobs proposed would mean that the person doing it would have no real control over the result, nor were they sustainable.

We were then offered the opportunity to change subject before having to further concretise the job spec to include exact location, demographic, use, hours, concrete day-to-day duties, etc. At this point I wasn’t tempted to change my cause since it would be easy enough to concretise my proposal, but as a result of all of the feedback I did feel that perhaps a better solution lay elsewhere, something much more simplistic, if only I could think outside the box. 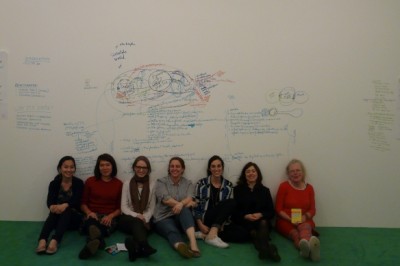