During my online residency for Mimosa House London, I interviewed the artist Karen McLean about her exhibition “Blue Power/ Arn’t I a Woman!” at Block 336 Gallery in Brixton 20th May to 12th June 2021. It was an amazing discussion about the poignant and unexpected resonance of her work in relation to current events; the emotions involved in making work utilising materials symbolic of and honouring the agency and resistance of enslaved women in the Caribbean; as well as other subjects including reparations and Roe v. Wade.

Since the interview recording was lost, Karen has generously written down her answers to the key questions I asked:

Oriana Fox:
How does this exhibition reflect your life experiences growing up in the Caribbean?

Karen McLean:
It reflects it in many ways and in particular through the materials I use. These are materials of my childhood and of my experiences growing up in the Caribbean that I have specifically chosen to perform. Growing up in post-independence Trinidad we went through many phases as you can imagine, there was a significant amount of dismantling to do, but these things took time. During this time, we had major upheavals, perhaps the most significant being the Black Power revolution. So, race and equality were issues that were visceral. Blue Power deals with the legacy of poverty due to colonialism and the subcultures and behaviours that develop in the act of survival. Additionally, I look at the syncretic religious practices that evolved from slavery to the present time and how people use these practices for protection in a society that has become increasingly violent. Inevitably as many people realise that life does not have much future for them in these societies they become increasingly willing to risk anything to seek a better life elsewhere. The materials, many of which are from my childhood such as Blue Soap do the heavy lifting due to their metaphorical use for protection. I have also used plasterer’s laths to express the historical issues and origami paper boats made from parcel paper.

Likewise, in Ar’n’t I a Woman I have used hessian sacks or crocus bags as we call them in the Caribbean to express the resilience and strength of enslaved women. The history of slavery has been written by men, for men, about men but the experience of the enslaved woman has, until recently, been occluded. This part of the exhibition seeks to celebrate the enslaved woman who had a very different experience to her male counterpart, one which was characterised by her constant resistance to the harsh plantation regimes. Today the Caribbean is indeed a matriarchal society, and women in the Caribbean are surpassing men in many areas which attests to their resilience and continued strength.

OF:
How do you intersect the personal with the political?

KM:
Growing up in the Caribbean is a very different experience as you can imagine to growing up here. I moved here as an adult and when one moves into a new country you basically lose your identity. I had to build a new identity from scratch. I guess when I look back the process starts in a serendipitous way through your kids. It’s the first place of contact where you begin to form friendships with other parents, and this was interesting as my relationships were with other recent immigrants or second-generation immigrants. My son, who is mixed race, come home saying things that indicated to me he realised he was being treated differently to the white kids. I became very interested in understanding the society I was now living in and did a cultural studies module. My tutor had come to Birmingham to work under Stuart Hall and the knowledge gained from this experience provided me with the building blocks for a turn in my practice. Also critical was Peter Fryer’s Staying Power. He was an English journalist hired to cover the arrival of the Windrush from the Caribbean. The image of these people arriving in their best clothes with so much hope and optimism for a new life in the Mother country juxtaposed with the disappointing reality of how they were treated once they walked off that boat. This shaped my ideas of the new society I had now become a part of. I think from that moment race and post-colonialism became a feature in my work.

I also did my BA (Hons) degree at BCU in Bournville – the home of Cadbury – and it was during my tenure there that I discovered that George Cadbury had two cocoa plantations in Trinidad between 1897 and 1917, that he developed in parallel to Bournville. He used indentured labourers, which in effect was the next form of slavery conceived by John Gladstone at the time. His labourers in Trinidad lived in huts made out of wood or mud with thatched roofs made from palms or metal. They wore no shoes and they often died from the worms that entered their bodies through their feet. At the same time, his workers in Bournville were living in what was celebrated in England as a model village for worker accommodation. This had a huge impact on me.

OF:
How does making autobiographical/political work impact on your life?

KM:
I think it’s a constant mental unravelling of things I took for granted and reformatting my understanding and appreciation of things. I guess I never had an opportunity to tease things apart and express my views and feelings as I now have through my art. So, it has been a revelatory experience on many different levels, one which I enjoy but one that can also be emotionally difficult at times.

OF:
What are you hoping the audience will take from the work?

KM:
I’m hoping the audience goes away with a totally different view of what they might have been previously taught or been exposed to. That their experience of viewing both works will add new material for them to think about and with which to interpret events around them.

OF:
Do you think your work communicates differently to different audiences?

KM:
Yes, art is so subjective, and you bring your own experiences with you. I remember when I did the sugar houses in Lewisham, Grenville Towers burnt down while I was installing the work. It was such a sad time for us. People came with that experience fresh on their minds and the exhibition took on another layer which I did not expect as there were many Caribbean people living in that Tower. The precarious life they sought to escape seemed to follow them. I would imagine that for people of Caribbean descent it would communicate differently to an English audience, but it is my hope that the work is universal enough to impact on most audiences.
—

The following are my (Oriana’s) notes about our discussion:

In speaking of the additional resonances to the works and their materials, as Karen brought up the burnt sugar houses of her prior installation linking to the atrocity of the Grenfell Tower fire which was contemporaneous with its exhibition, she also spoke of the resonance of the Blue Power soap now in the context of COVID, when hand-washing is a priority. I asked about the experience of making the work, as producing the thousands of boats must have been a repetitive and meditative and potentially reparative experience. In relation to this and expanding to address the emotional labour involved in creating ‘Arn’t I a Woman!’, Karen spoke about how painful it was to brand the hessian sacks for the installation as it entailed ruminating on how human beings, enslaved people had been branded. She decried the fact that no reparations had been offered or even an apology and how much just an apology would mean. My response to this in the moment was that I didn’t think she should have to go through that pain, that the people responsible, the people who should be apologising, should be the ones doing that emotional labour. I improvised the idea of a socially engaged, experiential work in which those responsible, or those who continue to benefit from the inheritance of wealth created by enslaved people, should be tasked with the act of branding sacks and thinking about this being done to human beings. In response, Karen said the queen should do that! To which I replied, alas I don’t think the queen will do it, but maybe Olivia Colman who played the queen in the Netflix series The Crown would? But if Coleman were to do this, the emotional labour is being done again by the wrong people. Then of course it comes back to the question of audience and representation as opposed to actual socio-political change.

Karen also spoke at length about the different tactics used by enslaved women to defy those in power, how they used their knowledge of plants, in particular, to undermine the masters and take back some control of their lives. Even under the direst of circumstances, these women had the agency to terminate unwanted pregnancies or, more harrowingly, commit infanticide to prevent their babies from being taken away from them into a life of enslavement. It was in relation to this that our conversation turned to the situation in the US now with the Supreme Court having a majority of conservative justices who could overturn Roe v. Wade. 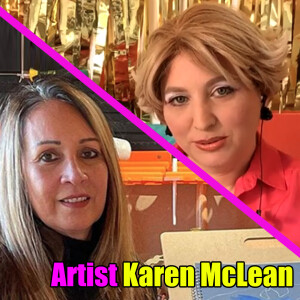